Ireland’s first youth orchestra comprising of musicians with disabilities had its debut performance on 19th September 2019. The Open Youth Orchestra of Ireland (OYOI) was created out of the Le Cheile project. A joint research project between the Royal Irish Academy of Music (RIAM) and Ulster University (UU). The Le Cheile (together in Irish) project brought together RIAM’s extensive experience and impact in national music education with UU’s research into accessible and inclusive music practices.

After 9 months of extensive work by all involved the four groups, representing the four provinces of Ireland, came together to form the Open Youth Orchestra of Ireland. A 30 piece orchestra performing electronic instruments using iPad, laptops, Leap Motion Controllers and LaunchPads.

As the creative technical lead it was my role to establish the ensembles and orchestra with not just technology but methods of using that technology in creative ways. For the debut concert I composed a work to showcase the possibilities of our accessible and inclusive practices.

Trip Tick for VR and electronics was a 25 min long composition using a new accessible virtual reality music interface (AVRMI) that was the prototype for WithFeel VR’s performance system. A unique and embodied method of music synthesis using 3D textures and morphology mapped to audio synthesis parameters of pitch and timbral modulation. The VR system was combined with the orchestra’s established forms of performance through accessible interfaces to create the large ensemble work.

The VR composition was created with Acoustronic using participatory methods and sees the performer travel through an ordinary home scene, a landscape and the deep ocean. But performing in an extraordinary way where everything is an instrument to perform, even animals. Below is a video of an early iteration of performance system in action with the underscore that accompanied the composition. This is not representative of the full composition but it gives an insight into the VR part of it. 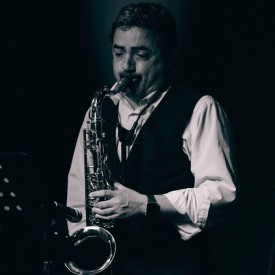 Lewis Smith is a performer, composer, programmer and academic. His current research is in accessible composition and performance practices using immersive technologies. Smith is coming towards the end of PhD at Ulster University and is the creator of WithFeel VR.