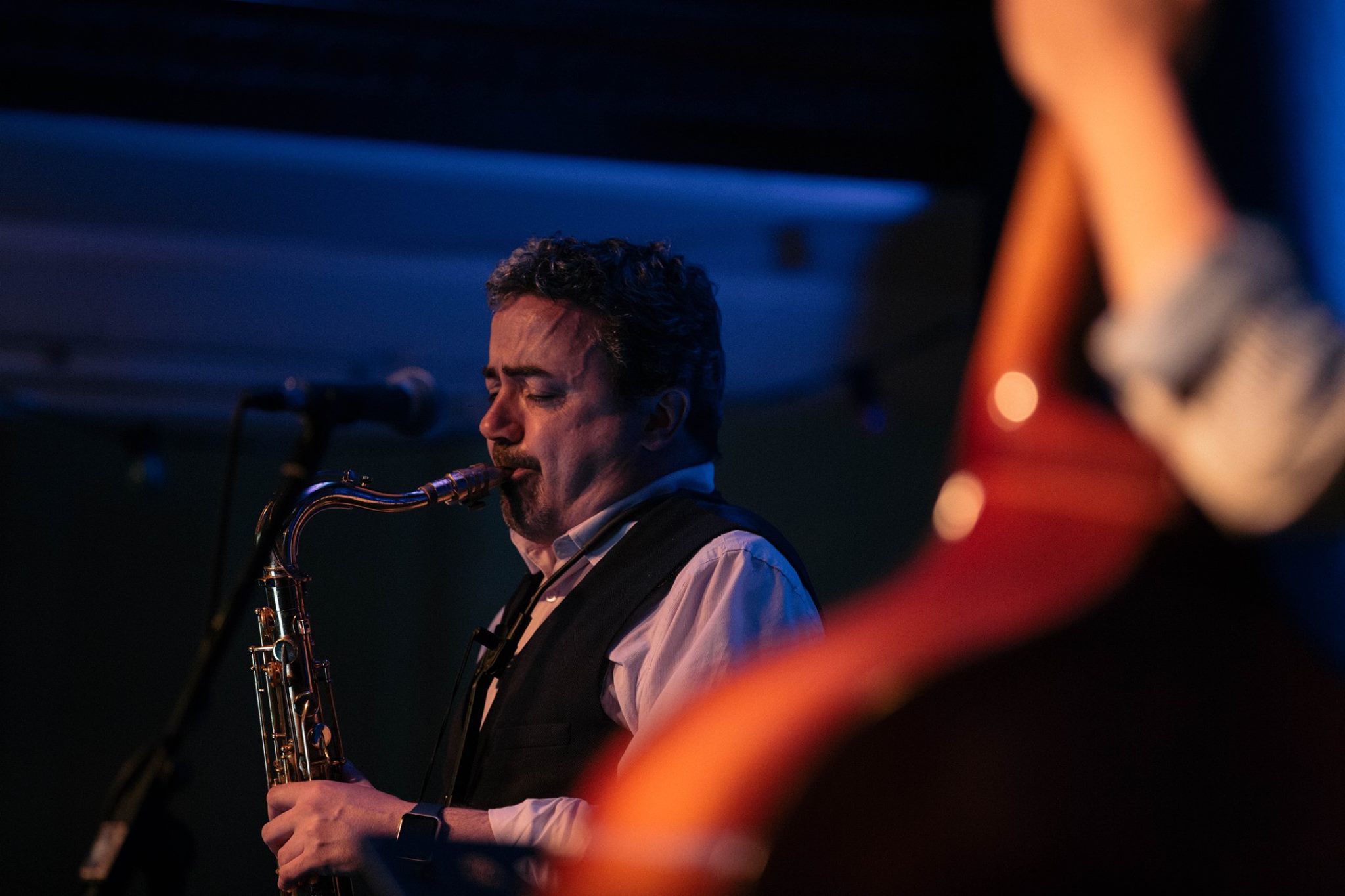 Hello all. This is me, Lewis Smith.

You’re maybe wondering what this site is all about and to be honest I haven’t a perfectly clear idea myself. As you can see from the picture I am a musician. For over 25 years I have performed, taught and composed music. I’ve went as far as travelling to Kazakhstan to research the traditional music there as influence for my compositions but mostly I have worked in jazz as the Soundcloud tracks below show. I’ve was the soprano saxophonist in the Brian Irvine Ensemble for 11 years, played Glastonbury festival with the DnB band Spree, performed in Kazakhstan and Kyrgystan, performed around Europe, worked for television and radio with compositions featured in a documentary about Belfast (my hometown). I’ve probably even played at your granny’s wedding and subsequent funeral. But things have changed in recent years.

But where does all the tech come in?

You probably noticed the home page focussing on VR and software development. That’s because I decided to go back to academia and some amazing people changed the direction of my work, and in particular my compositional practice, forever.

I’m currently a PhD researcher at Ulster University but I have gone through the masters degree there previously. On returning to academia I had the opportunity to work with an old friend, and now one of my PhD supervisors, Professor Frank Lyons. Frank’s research focusses on inclusive music practices; research he calls Inclusive Creativity. At the debut of Frank’s composition for String Quartet and Electronics “NonZeroSum” featuring Acoustronic and the Benyounes String Quartet I attended his workshop for composers (2017). There, I presented an early version of my composition for String Quartet and Electronics called ‘Galvanised’. The brief for the workshop was simple. The composition must work for both the String Quartet and for Acoustronic, an ensemble of musicians with intellectual or physical disabilities based at Ulster University.

I had worked with Frank on his composition and had experience with Acoustronic. Frank’s composition uses live graphic scoring as an inclusive tool. In fact, I built the simple web app that he used. I took advantage of that experience to design a new app for my composition called Wappic (Web APPlication for Inclusive Creativity). This app allowed me to create instruments for Acoustronic where drawing was a means of audio synthesis and performance. Galvanised was debuted at the VSMM conference 2017 and later at Calouste Gulbenkian Foundation’s International ‘Partis’ showcase in Lisbon. 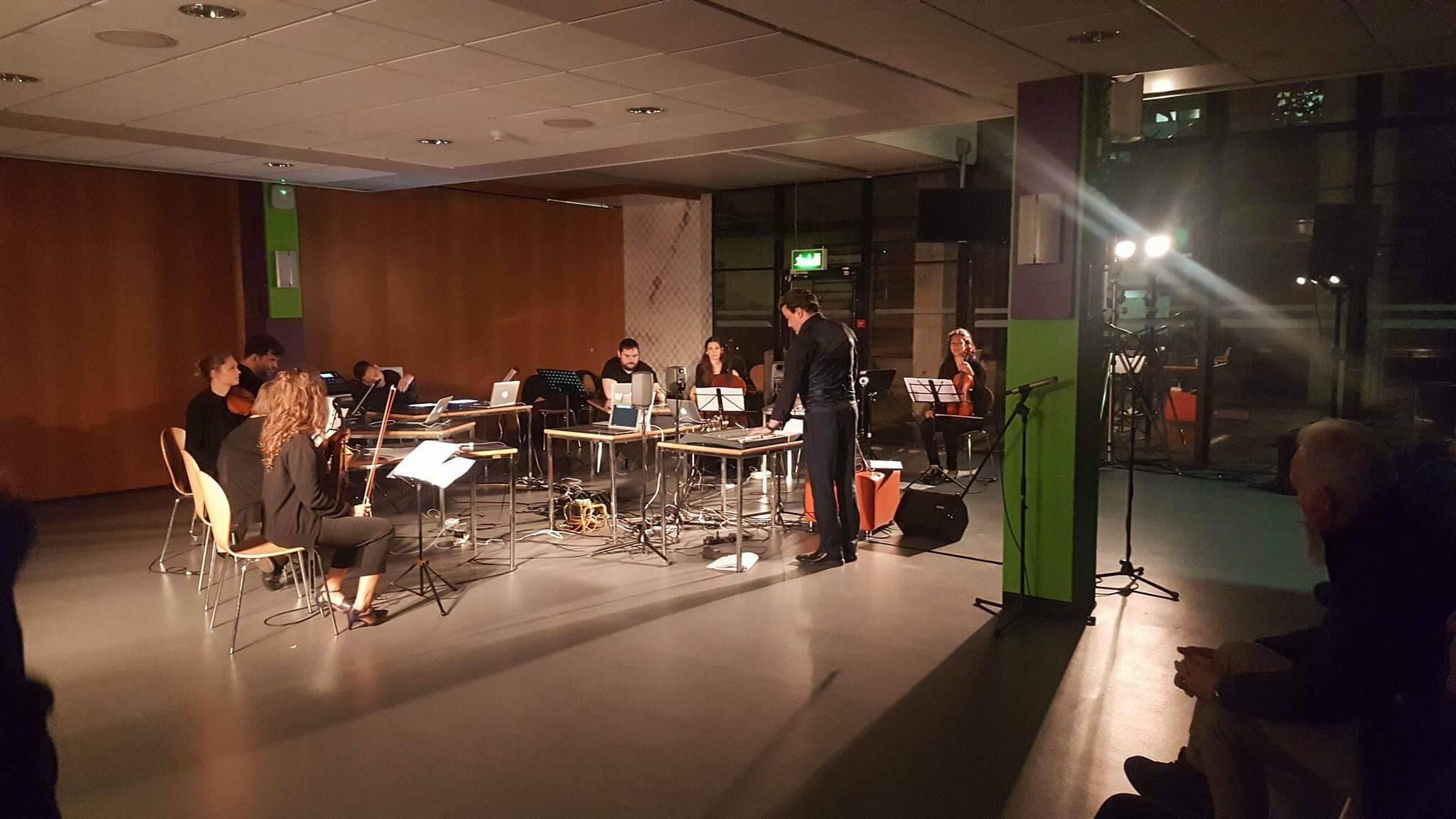 Since then Acoustronic and I have worked together to create new software and compositions. Compositions for saxophone and electronics and for jazz quartet and electronics. The latter being performed at the 2018 Derry Jazz festival.

Towards the end of my masters degree I became the creative technical lead in the Le Cheile project. A collaborative research project between Ulster University and the Royal Irish Academy of Music, funded by Creative Ireland. I hadn’t quite finished my masters but I had already submitted my PhD proposal. I planned on using immersive technology as a means of not only creating a new performance area for inclusive ensemble performances but as a space for compositions created by musicians like those in Acoustronic. For too long had I wielded the power of composition. It was time to hand the power over.

With Le Cheile we would replicate Acoustronic around Ireland. An ensemble in RIAM, Dublin, an ensemble in CIT/CSM, Cork and one in AIT, Athlone. The four ensembles would join together to form the Open Youth Orchestra of Ireland (OYOI). It was a highly ambitious project and one that I am proud to have been part of. The ensembles were provided with the same or similar equipment to Acoustronic. This was essential to create consistency among the groups and to forming the orchestra later. My UU partner in this project was Dr Denise White (research lead) and our RIAM partner Brendan Breslin (project coordinator). The four ensembles would work on their own compositions using White’s Conductology research and later they would come together as an orchestra performing with Conductology. During our work together Brendan Breslin would often say ‘go big or go home’. I decided I wanted to go big. Together Acoustronic and I built a performance system that would serve as part of a VR composition for OYOI’s debut concert. That performance system is the initial prototype and field study for what is now known as WithFeel VR.

And here we are at the present. My research (very, very briefly) uses embodied metaphors as a shared musical language. This shared language allows Acoustronic and I to design accessible VR music software in a participatory design project. To support this networked VR auditorium we are creating an Accessible Composition Interface that uses the same embodied music metaphors as a compositional tool.  My supervisors are Prof. Frank Lyons, Dr Brian Bridges and Dr Rob Casey.

I have recently been awarded Future Screens NI Future Creatives award to help me continue my research to PhD completion and beyond.

p.s. Withsmiles is an anagram of Lewis Smith. That’s how nerdy and boring I am.